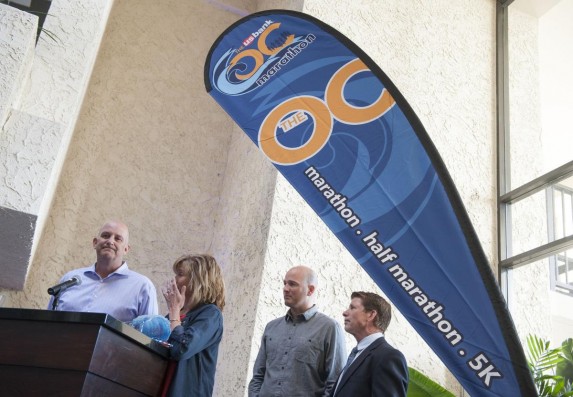 Steve Robert pauses tearfully next to his wife Alison as he remembers his son Jake, who died from cerebral palsy at age four, as the couple is inducted into the Orange County Marathon’s Hall of Fame Thursday. At right is OM Foundation founder Bonner Paddock and OC Marathon Race Director Gary Kutscher.

For the first time, the Orange County Marathon will be inducting people into a Hall of Fame. Story will focus on Steve and Alison Robert and the 10th anniversary of Team Jake. Their induction is a surprise. I’m told the parents now live in Austin, TX and both will run the marathon on Sunday but doublecheck that. Here is some background from a past story: Steven Robert, of Yorba Linda, is at the center of the pack, surrounded by friends, family members and two of his young sons, ages 9 and 7.

This is Robert’s second time crossing this starting line. But this time is bittersweet, he says.

Robert ran his first marathon last year in Orange County to raise money for United Cerebral Palsy. He jogged the last 100 yards with his four-year-old son Jake Ryan Lee Robert in his arms.

Even though Jake couldn’t say so – he couldn’t talk because his cerebral palsy was so severe – Steven knew his son was happy.

Jake was laughing as they bounced across the finish line.

“I was tired and just done with the day,” Robert says. “It was great because Jakey was the only reason I didn’t stop.”

The next morning, when Robert went to get Jake out of bed, he discovered his son had passed away.