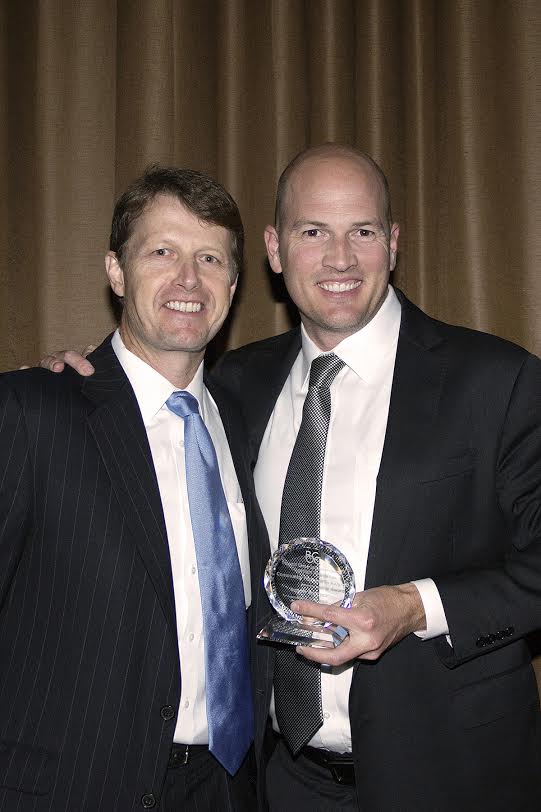 FOR WORK ON BEHALF OF PEOPLE WITH DEVELOPMENTAL DISABILITIES

GARDEN GROVE, Calif., March 7 – Tustin resident Bonner Paddock, founder and chairperson of the One Man One Mission Foundation, was honored by the Regional Center of Orange County (RCOC) with a “Spotlight Award” at a dinner-dance on Fri., March 7 at the Hyatt Regency Orange County in Garden Grove. The purpose of the awards program and event, which was attended by more than 600 people, is to honor those in Orange County who have advanced the quality of life for people with developmental disabilities.

Paddock (pictured right) accepted the “Community Partners” award from RCOC Board Chairperson Alan Martin (pictured left). Though diagnosed with cerebral palsy as a child, Paddock has never allowed his diagnosis to limit his ability to live out his dreams. Through the foundation he established in 2009, and his accomplishments – such as climbing Mt. Kilimanjaro unassisted and completing the Kona Ironman – he increases awareness of issues related to developmental disabilities and helps to eliminate barriers to full community participation for others with disabilities.

ABOUT RCOC: Regional Center of Orange County is the private, nonprofit organization contracted by the State of California to coordinate life-long services and supports to the nearly 18,000 Orange County residents with developmental disabilities and their families.