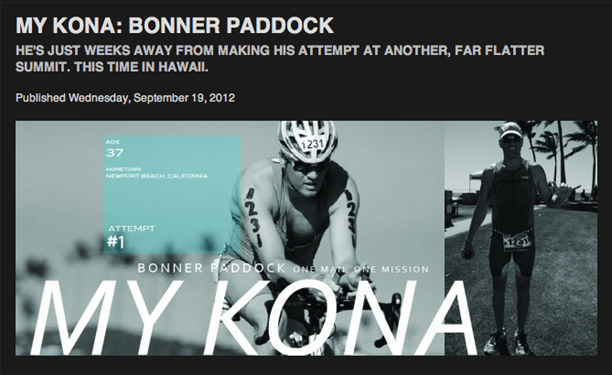 Through the One Man, One Mission Foundation, this IRONMAN Foundation athlete is aiming to raise a million dollars in support of initiatives to treat individuals with cerebral palsy.

Bonner Paddock is living proof that anything really is possible. After a string of incorrect diagnoses, a physician identified Paddock with cerebral palsy at the age of 11. He was told he most likely wouldn’t live past his early 20’s, a prognosis he has squashed with remarkable strength and numerous accomplishments.

In honor of a friend’s son who passed away and had been living with a severe case of CP, Paddock ran a marathon, raising $30,000. “A light bulb went on and I realized if I could go and do these physical events, it’s a great way to raise money for all these families that need help paying for services,” Paddock says. “I have a gift and I need to do these physical things that most people living with CP can’t do, to give hope to these kids and families. Somehow I can do all this stuff, so me experiencing a little pain here and there is nothing compared to what they’re going through.”

In 2008, Paddock took things to a whole new level when he became the first person with cerebral palsy to summit Mount Kilimanjaro, the highest mountain in Africa, as well as the highest free-standing mountain in the world. Documenting his journey in the film Beyond Limits, Paddock realized the powerful impact he could have on raising funds and awareness to those living with disabilities. A year after his extraordinary climb, Paddock founded the One Man, One Mission Foundation, with the purpose of developing learning centers to aid children with disabilities like cerebral palsy.