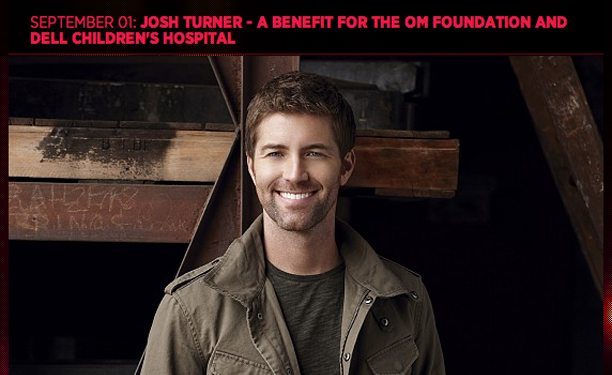 The Hannah, S.C. native has sold more than 5 million albums and garnered numerous multi-week No. 1s (“Your Man,” “Would You Go With Me,” “Why Don’t We Just Dance,” and “All Over Me”). His debut album, Long Black Train was certified platinum for more than 1 million copies sold, and his sophomore album, Your Man, was one of only four country albums to reach double-platinum status in 2006. The debut single from his fourth album Haywire, “Why Don’t We Just Dance,” a four-week No. 1 hit was the most-played song at country radio in 2010, according to Mediabase and #3 on Billboard’s year-end Hot Country Songs list, followed immediately by “All Over Me” at No. 4. “Why Don’t We Just Dance,” took home an American Country Award for “Single of the Year-Male” in December of the same year. Scoring back-to-back #1’s with his second single release from Haywire, “All Over Me,” made Turner one of only seven country artists to have two No. 1 hits in 2010. Six years after his Grand Ole Opry debut, he was inducted into the prestigious organization, becoming one of the youngest artists to receive such an honor.

Turner’s fifth studio album Punching Bag is in stores now and his current tour is being sponsored by Cracker Barrel Old Country Store.

Josh uses this same approach to his career in the music industry, where many artists seem to come and go quickly. “I don’t ever want to take anything for granted,” he says. “I’ve learned from certain people that it takes a lot of hard work, passion and love for what you do to have longevity in this career.”

OM Foundation was started in 2009 by Bonner Paddock, who was born with Cerebral Palsy. OMF is committed to raising money to build “Early Learning Centers” that provide various types of therapies for children with disabilities, not just children with Cerebral Palsy. “With our network and relationships in Central Texas it became obvious that there was an opportunity for the OM Foundation,” Paddock said. “After our first discussion with Dell Children’s Hospital we knew that we had found the perfect partner. We’re excited about this kick-off event, and we greatly appreciate ACL Live and Josh Turner for making this a reality.”